As we enter spring and the rainy season approaches, it’s more important than ever to have a stockpile of feel-good movies prepared for those cozy days spent bundled up indoors! 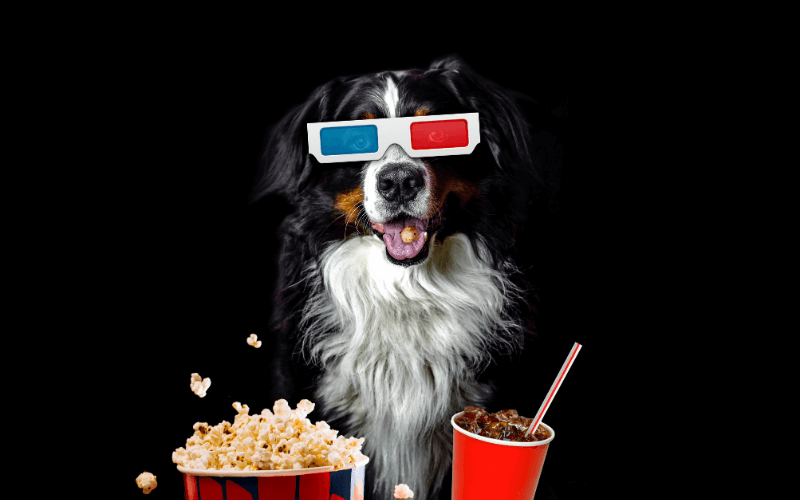 For all you canine lovers out there, we have the perfect movie day prepared right here. Netflix, believe it or not, has an outstanding selection of dog movies, all ranging from hilarious to heartwarming.

So, be sure to grab your warmest blanket and a sizable bucket of popcorn as you curl up next to your pup to binge these pet-friendly pictures!

It seems fair to say that A Dog’s Way Home is one of the cutest movies I’ve ever seen.

First of all, any dog-related film that focuses solely on the dog’s devotion and love for his family is amazing. Secondly, watching the star of the movie, Bella, make friends everywhere she goes just proves the power of puppy love.

To give a short rundown of the story, Bella is somewhat suddenly separated from her family and swears that she will find them again. The one downside is that she is approximately 400 miles away from her home in Denver, Colorado.

However, Bella refuses to give up on her family. She decides to make her way back to Denver on her own, embarking on a two-year quest alongside animals and people she meets in the wild.

Is the movie a tear-jerker? Absolutely! But I promise these will be happy tears.

Honestly, All Dogs Go to Heaven is a wild ride from start to finish.

It’s hard to pin down a genre to describe the film… It is animated, but it isn’t anything like the Disney movies from the ’90s. There’s music, comedy, drama, adventure, and even fantasy.

All Dogs Go to Heaven is a touch dark for young children. The story follows a german shepherd, Charlie B. Barkin, who has been killed by a former partner.

He does, indeed, go to heaven. However, he decides he would instead return to earth. Along his journey, Charlie learns many lessons about love and kindness.

The star-studded cast of the movie delivers an unforgettable performance. Prepare for plenty of laughter, tears, and heart-pounding thrills!

You might remember Benji from his film debut in 1974, but as with all things vintage, he has come back with a refreshed, modern take.

This 2018 Netflix original follows the classic storyline of a stray dog who is saved by a family that, in turn, needs some saving of their own.

When two young kids, Carter and Frankie, stumble upon this dirty street dog, they immediately fall in love.

While their mom is not so happy to find out about their adoption, she quickly changes her tune when Benji makes a daring attempt to save her children from grave danger.

Benji provides the perfect mixture of adventure, comedy, and affection, making it the ideal movie for families. However, if you’re one of those who watched the original feature, this updated version provides a generous dose of warm nostalgia.

I’m sure there are plenty of dog-loving Millennials out there who remember the charming film Hotel for Dogs, right? Now you can relive your youth by watching it again on Netflix!

For anyone unfamiliar with the movie, Hotel for Dogs follows the tumultuous path of two young orphans who want nothing more than to live a happy life with amazing parents and their dog.

Unfortunately for the kids, their current foster parents are not keen on animals, and they show no interest in being a real family. It might sound devastatingly sad, but thankfully, there is a bright side!

Hotel for Dogs is all about finding the light within the darkness. It focuses on the idea of creating a chosen family and giving support to those in need. Overall, the film is excellent for people of any age looking to enjoy a night-in.

June and Kopi offers a fresh lens in dog-based film since it is centered around Indonesian culture.

If you’re not a fan of subtitles, I do urge you to push past that distaste and give this movie a fair chance. In fact, if your child is old enough to read, the subtitles would offer a great view into a new part of the world.

It all starts when a stray dog, June, attaches herself to a woman she meets. While the woman loves June, her husband is hesitant to have a stray dog in the home.

He continually refuses to allow June inside the house, only wishing to leave the home open to his dog, Kopi.

Over time, June does everything she can to prove herself worthy of her spot in the family. She works hard to overcome the stereotype attached to her since she came from the streets.

As with most of the films on this list, June and Kopi is a fun story full of twists and turns that just might yank on your heartstrings.

Some people do not give animated films enough credit for their outstanding storytelling, and Mr. Peabody and Sherman serves as complete proof of this!

This movie is greatly overshadowed by its successful Dreamworks counterparts, but it deserves much more recognition.

Mr. Peabody and Sherman flips the script generally associated with dog films. Rather than an adorable pup being adopted by a group of humans, Mr. Peabody adopts a human son named Sherman.

Mr. Peabody is a dog who loves learning of all kinds, but he especially enjoys teaching Sherman about history by taking him back through time.

The story is full of funny hijinks and shenanigans. Still, more than anything, Mr. Peabody and Sherman highlights the importance of loving your family and embracing your passions.

While Pick of the Litter would make a fine family film, this story best suits anyone who can’t stop themselves from watching inspiring documentaries.

The movie focuses on the journey a dog must take in order to become a guide for those with visual impairments. It specifically follows one litter of puppies as they traverse their two years of guide dog training.

As you might have guessed, there are undoubtedly ups and downs that come with this process of training young pups. It’s incredible to see the work happening in real-time.

Pick of the Litter is a beautiful reminder that our dogs are intelligent, caring creatures with whom we build the most extraordinary relationships.

The film may not hit everyone with the same emotions. Still, it definitely had me appreciating my own furry companion that much more.

It can be a challenge to develop a sequel that feels just right. In most cases, the film will have huge shoes to fill, making it all too easy for audiences to be left feeling disappointed.

The Secret Life of Pets 2 accurately depicts the sequel we want to see from all of our favorite franchises.

The movie focuses on the dogs, Duke and Max, and their various animal friends. The story expertly balances that fine line between being hilariously relatable to pet parents and extremely wacky to children.

While the plot does shift between each character of the film, it maintains a lighthearted tone and emphasizes camaraderie above all else.

The Secret Life of Pets 2 has a few touching moments, but it is mostly an excellent film if you’re aching for a couple of deep belly laughs.

Some of you might have enjoyed reading the novel White Fang by Jack London while in school. Being passionate about dogs from a young age, I certainly did!

While I haven’t touched the book in years, I can say that the Netflix adaptation does a great job of placing the spotlight on the relationship between man and nature.

The animation is just stunning to look at, which truly brings the setting to life. More than that, the story feels grounded in realism.

As a pup, White Fang is separated from his mother, but he comes of age with the guidance of a Native American tribe. While he does work for the tribe, they are never cruel to him.

In stark contrast, White Fang does eventually find himself with a human who is mean and vicious. The light and dark found within humanity are showcased in how these different people interact with White Fang, who is nothing but a gentle beast.

The film spins a beautiful tale that will likely be appreciated for years to come.

I don’t know about you, but I am now entirely ready to Netflix my night away to these fantastic dog movies!

I’m probably a bit biased since I am the one who created the list, but this movie marathon will bring everything to the table. There’s action, comedy, and powerful emotion scattered among films ranging drastically in genre.

What more could you possibly ask for?

There’s nothing better than snuggling up with your dog on the couch. What’s not so great is when your couch starts to smell like your dog. Unfortunately, lingering pet smells…

Upland hunting, or bird hunting, is a great way to spend time with your best friend. Because upland birds (such as grey partridge, pheasant, grouse, and quail) tend to shelter…

If you’re going to make a habit out of taking your dog with you in the car, it’s very important to purchase a quality SUV pet barrier. We all know…

A stroller for hiking is the one thing you never knew your dog needed! Pet strollers are an absolutely awesome addition to any dog family. After all, we all want…