They might look like a bone-shaped pet treat and they are even named after a popular dog character, but can dogs eat Scooby Snacks safely? While they probably won’t do any damage as a one-time snack, it’s probably a good idea to avoid giving your dog Scooby Snacks on a regular basis. How are Scooby Snacks made?

Kellogg’s Scooby Snacks are based on a fictional food that was featured in the Scooby Doo cartoon series. They are basically baked graham crackers made for humans, and the main ingredients are whole flour, sugar, oil, honey, and cinnamon.

None of these ingredients are toxic for dogs, but they aren’t a necessary part of a canine diet (some of them also aren’t particularly healthy).

Interestingly, there is also a brand that makes dog treats with the same name. These treats are completely different from the ones made by Kellogg’s and sold in supermarkets. There is even another version of Scooby Snacks that is similar to Fruit Snacks gummies, which are also unhealthy for dogs.

Which Scooby Snacks ingredients are bad for dogs?

Although wheat is a main ingredient in most store-bought dog biscuits, dogs that are sensitive to gluten or are on a special diet for allergies should avoid graham crackers.

Palm oil is also an ingredient in many dog treats, which is a fat that dogs don’t need. This oil may cause diarrhea or vomiting if your dog ingests too much of it. In addition, palm oil has been linked to pancreatitis in dogs.

At 9g of sugar per serving, these snacks are almost as bad for your dog’s teeth as they are for their waistline. Dogs don’t require added sugar, and the natural sugars found in fruits are better for them than processed sugar.

Another ingredient we don’t like to see in our dog’s food is BHT. This is a synthetic preservative that’s been linked to cancer in lab animals. The amount of BHT in Scooby Snacks is probably not enough to harm your dog, but it is still unsettling to know it’s there. Luckily, not all the ingredients in Scooby Snacks are not-so-great. Scooby Snacks offer two main flavors to choose from: cinnamon and honey graham crackers.

Cinnamon is safe and non-toxic for dogs when served in small amounts. It may even offer some health benefits. Cinnamon is antiviral, antibiotic, and antifungal. It can help improve gut health and digestion, reduce blood pressure, and lower blood sugar levels.

Like cinnamon, honey is safe for dogs in small quantities and may also offer health benefits. The pollen in honey can help clear up your dog’s allergies, and the smooth, sticky texture can help soothe a sore, itchy throat.

How many calories are in Scooby Snacks?

According to the nutrition label, Scooby Snacks contain 130 calories per serving, and each serving is about 9 crackers. When you do the math, that’s about 14 or 15 calories per individual Scooby Snack.

14 calories may not sound like a lot, but dogs have different caloric needs than humans. If you have a smaller breed, you need to be particularly careful about your dog’s calorie intake.

That said, the problem with Scooby Snacks isn’t necessarily in the calorie count but in the fact that most of those calories come from flour, sugar, and oil. None of these ingredients offer your dog any nutritional value so they are simply empty calories.

How many Scooby Snacks can I give my dog?

While Kellogg’s Scooby Snacks are marketed for humans, there may be times when your dog wants to get in on the action. As an occasional treat, graham crackers aren’t bad for dogs, as long as the rest of your dog’s diet is well balanced.

If you really want to, you can safely feed your dog a Scooby Snack or two. But it would be better to feed them treats with some nutritional value, or to bake your own homemade version of Scooby Snacks that are tailored to your dog’s dietary needs.

Riley’s Organic Peanut Butter & Molasses biscuits are a great alternative to Scooby Snacks. They contain healthy ingredients like oats and peanut butter that are good for your pup, and they’re actually good for humans to eat as well!

1. Preheat the oven to 300 degrees F (150 degrees C).
2. Peel the bananas and mash them in a medium-sized bowl. Add the egg, peanut butter, water, and honey. Mix the ingredients well.

Adding just a small pinch of cinnamon to homemade dog treats is a great way to provide health benefits as well as an added flavor boost.

3. Stir in the flour and oats until dough forms. You can add more flour if the dough is too sticky.
4. On a floured surface, knead the dough into a ball and flatten to 1/4th-inch thick.
5. Use a cookie cutter or a knife to cut dough into dog bone or biscuit shapes.
6. Transfer shaped dough onto a greased cookie sheet.
7. Brush the tops of the treats with egg white (optional).
8. Bake until golden (about 30-40 minutes) and cool on a wire rack.
9. Allow treats to cool completely before serving to your dog.

Scooby Snacks sound like the perfect treat for dogs. They’re fun, delicious, and can satisfy your pup’s sweet tooth. However, it is important to remember that these snacks are made for human consumption, and although they are not harmful to dogs, they can create certain health issues when fed too often.

The good news is that there are healthy alternatives for dogs that love Scooby Snacks. If you’re really serious, you can even make your own. 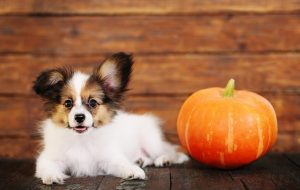 While many pet owners are content to serve their dog any old kind of food, without paying much attention to… 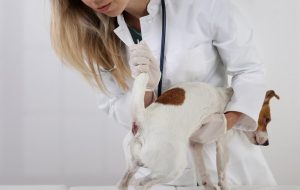 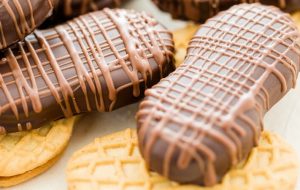 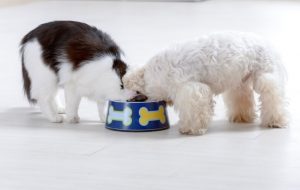 As a pet lover with more than one animal in your home, you probably know how difficult it is to…

Food
PuppyTip is a participant in the Amazon Services LLC Associates Program, an affiliate advertising program designed to provide a means for sites to earn advertising fees by advertising and linking to Amazon. As Amazon Associates, we earn from qualifying purchases. We also participate in other affiliate programs, such as Chewy, Walmart, and others, which help to support our work.