Can I Use Antifungal Cream on My Dog?

Fungal infections affect dogs as well as people and often happen when a dog comes into contact with another infected dog or animal, from contact with something in the environment, or as a result of the overgrowth of fungi naturally present on the dog’s body. If you have a dog and are treating him for a skin fungal infection, you may want to know if an antifungal cream is safe and if you can use it on your pet. This article will discuss certain fungal infections and how to treat them. 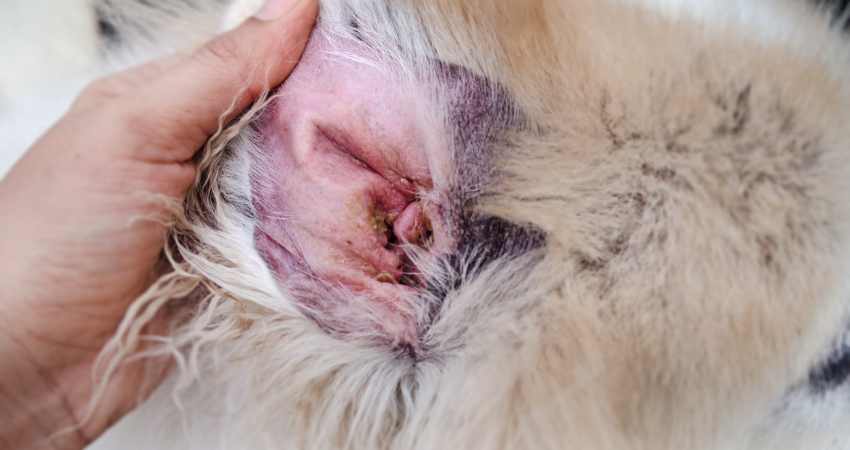 How does a dog get a yeast infection?

Yeast exists naturally on the dog’s body and usually does not cause an issue unless your dog has allergies or an immune condition.

Yeast dermatitis, for example, is very common in dogs and is caused by the fungus Malassezia pachydermatis. According to VCA, this yeast is normally found on the skin, but its abnormal overgrowth can cause dermatitis or inflammation of the skin. This can create an environment in which bacteria can thrive and reproduce, creating what veterinarians refer to as a secondary infection.

This kind of yeast infection is not contagious and is often caused by the production of excess skin oils. In floppy-eared dogs, an overgrowth of yeast produced by a warm, moist environment can cause ear infections of both the middle and inner ears. Dogs with yeast infections often have chronic ear infections, and the yeast will give off a distinct musty odor.

Other fungal infections occur when fungal spores in the environment come into contact with your dog via inhalation or through the skin. There are many different types of these external fungi, including blastomycosis, a fungus that affects the lungs, or ringworm, which is caused by a fungus called dermatophytosis.

Ringworm is a common skin infection that is caused by a fungus. When most people hear the term “ringworm,” they think of worms. However, ringworm gets its name from the circular shape of skin lesions that the fungus creates on the skin. The fungus that causes ringworm, dermatophytosis, lives on the skin, clothes, and furniture, and humans can also contract ringworm from infected dogs and cats.

Symptoms of a yeast infection include hair loss, redness and itchiness, and thickened, crusty skin. Fungal infections may also produce an unpleasant odor caused by the bacteria breaking down the skin’s fats and oils.

How do you treat a fungal infection on a dog?

Once your dog is diagnosed with a fungal infection, your veterinarian will discuss a treatment plan for your dog. The treatment plan depends on the severity of the case, the nature of the fungus, and if there are any other pets in the household. A vet can determine the identity of a fungus in several ways, such as by taking a skin-scraping sample, microscopic examination, or via a special ultraviolet light called a Wood’s lamp that can detect the fungus dermatophytosis.

Treating fungal infections in dogs usually involves the use of topical antifungal creams such as clotrimazole and miconazole, oral medications, and environmental decontamination if needed. If the dog has an ear infection due to yeast overgrowth, treatment may involve a thorough ear cleaning and a round of antibiotics to fight possible secondary bacterial infections, as well as antifungal ear drops.

Other treatments may involve the use of medicated shampoos. Many dogs with oily skin will first require cleansing with a shampoo containing benzoyl peroxide or selenium sulfide, or bathing with an antifungal shampoo that contains chlorhexidine and antifungal agents. The good news is that most dogs and humans make a complete recovery after a ringworm infection.

Bacterial infections are very common in dogs and horses but not so common in cats. The treatment for a bacterial infection includes antibiotics and sometimes topical creams or lotions with antiseptic in them, and more importantly, the unknown health problem diagnosed and treated to prevent any further infection.

What antifungal cream is safe for dogs?

There are several creams that veterinarians prescribe to combat fungal infections, and these creams are applied topically to your dog’s skin where a fungal infection is located. Veterinarians may suggest using gloves when applying some antifungal creams to prevent the spread of the fungus.

Miconazole: Monistat is an antifungal cream that is typically used for vaginal yeast infections in humans. The active ingredient is Miconazole Nitrate, which is effective for the treatment of fungal infections such as ringworm, and for superficial skin and ear infections caused by an overgrowth of yeast. Although Monistat is safe to use on dogs, it’s important to check with your veterinarian first before applying this ointment to your dog or your dog’s ears.

Clotrimazole: Also known by the brand name Canesten or Lotrimin, Clotrimazole is a topical antifungal cream used to treat athlete’s foot in humans and fungal infections in dogs and cats. The cream is usually a 1% Clotrimazole concentration. It can be purchased over the counter, however, do not use it on your dog without direction from a veterinarian. The usual dose is to apply a thin layer to the affected area twice a day for 14 days.

Econazole: Econazole Nitrate cream comes in a 1% concentration and is used to treat ringworm in dogs, cats, and horses, as well as other fungal skin infections.

Ketoconazole: Sold under the brand name Nizoral, this cream is used to treat fungal infections of the skin and nails, and can also come in the form of a shampoo mixed with the antibacterial solution Chlorhexidine.

Itraconazole: This medication usually comes in the form of an oral solution, but it’s also available as a 1% concentration in a cream. It treats serious fungal or yeast infections in dogs.

What if my dog licks the antifungal cream?

Antifungal creams and lotions are meant for external use only, and veterinarians will recommend preventing your dog from licking and swallowing any of these medications. However, many veterinary formulations are designed for rapid absorption through the skin to minimize issues with ingestion. Some veterinarians may also recommend the use of an e-collar to minimize the licking of treated areas.

If you are still concerned about your dog licking antifungal cream, consult your vet.

Carol is a registered veterinary technician with 15+ years of experience in veterinary medicine. She lives in New Mexico with her husband, three goofy dogs, three demanding cats, and three well-fed horses.

If you’re like me, you’re willing to do everything in your power to make things easier for your pup. Osteoarthritis, or arthritis, is something that can really affect the quality…

With the increasing popularity of CBD, marijuana, sativa, hemp, and other natural plant-based products, some pet owners may wonder about using it for their dogs. Is it safe? Is it…

After smell, hearing is the most important sense for animals. Therefore, it’s no surprise that so many pet parents take ear problems seriously. In fact, this is one of the…

Himalayan salt lamps are one of the hottest current trends in natural health and wellness. The lamps are said to have powerful healing and cleansing properties, they’re relatively inexpensive and,…