Why Is My Dog Staring at the Ceiling?

All dogs are different and unique. They each have their own distinct personalities and weird behaviors that help to make them oh-so loveable! When I caught my dog staring at the ceiling, I figured it was just that. I thought that he was simply being his goofy self. However, when I saw him doing the same thing a couple weeks later, I started to wonder… Why is he staring up there? Should I be worried about him? You see, the reason your dog is staring at the ceiling could range from not-so-harmful to extremely worrying. Before you start panicking, take a deep breath — Your faithful companion is likely to be perfectly fine. Here’s what you need to know. 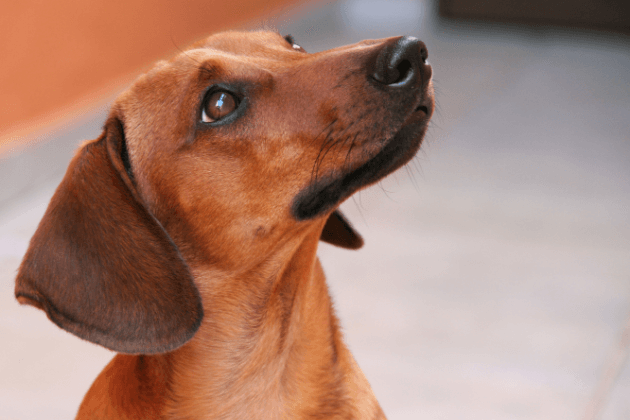 You probably already know this, but dogs have incredible senses. They can hear, see, and smell things that often pass by humans completely undetected. That being said, chances are very high that your pup heard something crawling across your roof or in your ceiling. Or, if you see him smelling the air, perhaps he caught a whiff of something that piqued his interest.

The simplest solution here is to examine the issue yourself as best as you can. If you also happen to hear something chittering about, whether it be within your ceiling, walls, or floors, definitely try to reach out to an exterminator as soon as possible.

As I stated in the last section, dogs have senses that far surpass our own. It is for that reason many people believe that our furry friends can feel the presence of spirits. While not based in science, I felt that this point was worth mentioning on behalf of any believers out there.

If you find your dog appearing anxious as he stares up at your ceiling, it is far more likely that he is smelling or hearing something that rubs him the wrong way, but I’m also not going to discredit anyone’s experience.

More often than not, the end goal of a dog acting in a particular way is to receive attention and affection. If you find yourself praising your dog, talking to your dog, or even looking at your dog a bit more than usual when he stares up at the ceiling, he may treat it as a behavior that he can use in order to get what he wants.

Canine Compulsive Disorder (CCD) is the dog version of our OCD. With CCD, your dog will begin to develop a series of repetitive actions or hyperfixations due to boredom. CCD is difficult to diagnose, but there are many symptoms that you can consider when watching your dog’s behaviors.

Behaviors often demonstrated in dogs with CCD include spinning, tail biting, barking, fly biting, or chewing on themselves. They may also stare off into space or up at the ceiling, possibly as though they are tracking the changes in the lights and shadows. If you find your dog exhibiting any of these symptoms, especially over a long period of time, it is best to contact your vet immediately for a screening.

How to Help CCD

Because there is no cure, you will only be able to find the means to manage CCD. Most vets will recommend pharmaceutical treatment accompanied with training related directly to their obsessive behaviors. When left unchecked, CCD can directly affect a dog’s quality of life to the point where it could even lead to euthanization.

If we’re strictly examining the problem of staring at the ceiling or watching for lights, your dog may wear himself down beyond repair by tilting his head back or chasing the lights so often. If you can train your dog to lay down and avoid the triggers for his obsessive behavior, then there may be some relief for him.

Should I also be concerned about my dog staring at walls?

Staring at walls or staring into space could definitely be a result of the issues that have already been mentioned in this article. However, there are a few more problems that could be connected to staring straight ahead, specifically.

If your dog often stares into space, he could be experiencing what is known as a partial seizure. These seizures are not often life-threatening, but they could result from more concerning complications, such as cancer or ingestion of poison. See a vet right away if you notice a pattern in how often your dog zones out.

If you have an elderly dog who often stares into space, you may need to contact your vet to see if he can conduct a screening for Cognitive Dysfunction Syndrome (CDS). CDS is most similar to Alzheimer’s disease in humans. With CDS, your dog may seem disoriented, change how he interacts around people, show a difference in his sleep patterns, or forget certain aspects of his house training.

If your vet suspects that your dog has CDS, he will likely recommend an increase in playtime for both physical and mental stimulation. He may also provide your pup with a new, antioxidant-packed diet.

You, above anyone else, are familiar with your dog’s set of behaviors. This is why it is incredibly important for you to always keep track of his actions and mark behaviors that you find a little odd or out of the ordinary. With staring at the ceiling, it is definitely likely that your dog is just being a dog.

However, always reach out to your vet if you find yourself having concerns.

Li-ran believes that dogs can teach us more than we could ever teach them. He is passionate about holistic pet care, natural alternatives, and cooking homemade meals for his dog, Richie. 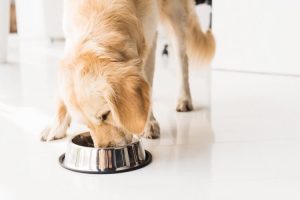 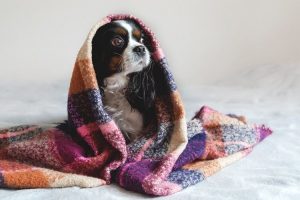