Do Dogs and Rabbits Get Along?

Have you ever seen a dog chase a rabbit? 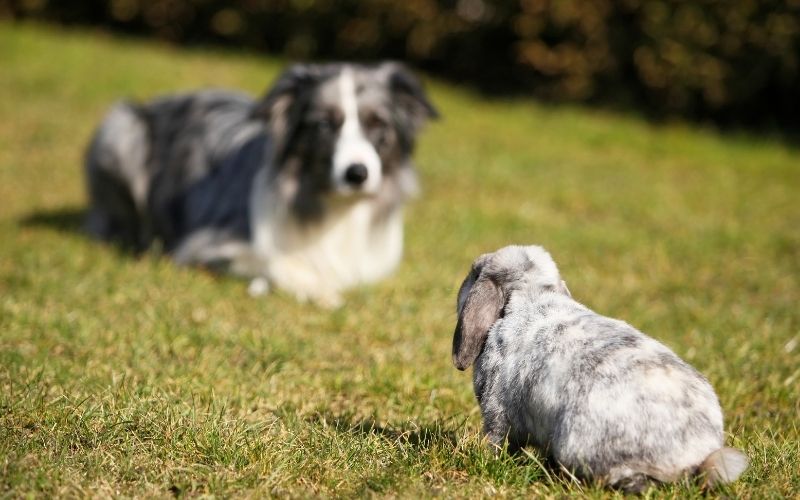 Then you probably know that he isn’t eagerly running after him to make friends. Dogs are natural predators and they instinctively chase rabbits to kill them.

But if you have your heart set on owning both a dog and a pet rabbit, all hope isn’t lost!

Some dog breeds can be trained to get along with rabbits. With the right breed and some careful, patient training, you can be the proud owner of both a dog and a rabbit without worrying about them harming each other.

Why Do Dogs Chase Rabbits?

If you’re not sure why dogs chase rabbits, the answer is that they are almost always trying to attack them.

Some dog owners get confused because they think their dogs are just trying to play with the rabbit, but this is not always the case. Even if your dog is treating your rabbit as a toy, it’s a form of attack and is part of your dog’s predator instinct.

This is a perfectly natural instinct and doesn’t mean that your dog is a particularly vicious attack dog or that his temperament or personality is cause for concern. It’s also not an indication that your dog will attack children or other humans.

Are Rabbits Scared of Dogs?

Just as dogs are wired to chase and attack rabbits, rabbits are naturally afraid of dogs.

Dogs and rabbits have an innate predator-prey relationship. In fact, rabbits have been known to literally die of fear in cages when dogs are around to approach and bark at them, even though the rabbits are safe from attack inside the cage.

Although rabbits are herbivores and have no predator instinct, they will bite a dog if they feel threatened.

When it comes to fight or flight, a rabbit’s first instinct is to run, but if they are backed into a corner or attacked, rabbits will likely try to bite a dog in self-defense.

Can I Train My Dog Not to Attack or Chase Rabbits?

Unfortunately, not all dogs can be trained not to attack or chase rabbits. As predators, it’s their instinct and often cannot be quelled.

If you have a calm, well-trained, non-aggressive breed dog, you may be able to train him to ignore your rabbit and coexist peacefully. If your dog, however, loves to chase cats or other small animals, a rabbit may not be the right choice for you.

Which Dog Breeds Are Good With Rabbits?

Some dog breeds have a lower prey drive than others, and they are best suited for interaction with a pet rabbit. These breeds include Maltese, Bichon Frise, Japanese Chin, Golden Retriever, Great Pyrenees, and Chihuahua.

Even with these gentler breeds, there is still no guarantee that they won’t attack your rabbit. It really depends on the individual dog.

On the other hand, certain breeds are particularly likely to chase and attack rabbits. If you have one of these breeds of dog, you should probably avoid getting a pet rabbit, and vice versa.

This is by no means an extensive list, and some dogs may still be able to get along with a rabbit without showing any prey drive whatsoever.

How to Introduce a Rabbit to a Dog or a Puppy?

Secure the Rabbit: When you introduce your dog and rabbit, you should let the rabbit be in his normal environment, whether it’s a cage, hutch, or behind a fence. Your dog should be on a non-retractable leash and monitored closely.

Take It Slow: Wait until your rabbit is acting curious towards your dog instead of fearful to allow them to approach and smell each other. Do not force them to get close to one another.

When your rabbit hops up to your dog instead of hiding or running away, and your dog no longer whines or aggressively lunges towards the rabbit, they are ready to meet in person.

Use Positive Reinforcement: When your dog meets the rabbit (still on his leash and at a safe distance), distract him from pouncing or chasing by gently tugging his leash.

If he stays calm and ignores the bunny, praise him and give him a treat. You want to break his habit of chasing the rabbit and get him to focus on you instead.

Keep It Short: Again, you can’t force or rush this interaction and you must wait until your rabbit is comfortable and your dog is relaxed. Aim for short sessions (up to 10 minutes) 2-3 times a day.

Also, note that there are some precautions you can take to ensure the safety of both your furry friends.

First, never leave a rabbit and a dog alone together unsupervised, even if the dog is well-trained and has never exhibited signs of aggression towards the rabbit in your presence.

Remember, your rabbit has an instinctive fear of dogs, and can even die of fright in the presence of a dog. It’s best to keep them in separate rooms when you aren’t home. Preferably, they should also have different feeding areas and feeding times.

Second, you should not attempt to introduce your dog to a rabbit if you have a dog that is strong enough to break free of your grasp. If needed, ask a family member or friend to help.

Now, you might think that introducing a puppy to a rabbit is a good idea because puppies are smaller than adult dogs and the puppy can learn from an early age not to attack rabbits.

However, you should probably wait until your dog stops nipping and learn to obey commands, such as sit, stay, and down before he can be trusted to control himself around a pet rabbit.

Why Does My Dog Whine at My Rabbit?

Although whining may sound like a signal of fear, when your dog whines at your rabbit, it is a sign of aggression or affection, which can be equally dangerous to your rabbit.

If your dog is still whining at the rabbit after several introductions, he is not ready to be allowed near him, even on a leash. Wait until your dog doesn’t react to the bunny before introducing them again.

While it’s possible to train a mature dog to get along with a pet rabbit, it will require the right dog breed and careful training.

However, no matter how well-trained your dog is, you should never leave him alone with your rabbit under any circumstances, even if he has never attacked the rabbit before and the rabbit is in a cage.

Your goal in training shouldn’t be to make your rabbit and dog friends but to teach your dog to ignore the bunny. If you follow these guidelines, you may be able to own both a dog and a rabbit.

Doesn’t matter if they end up on our lap, at our feet, or on our head or chest – dogs like to be close to us for many reasons. Even…

After a long hard day, nothing is better than coming home to a pet. It can strike a chord of jealousy, however, when your furry friend is peacefully curled up…

Have you ever heard of Astraphobia? Apparently, dogs can be afraid of thunderstorms, too, and it’s probably more common than you think. Keep in mind that there may be several…

Does your pup experience nighttime restlessness? As you may already know, this can cause loss of sleep not only for your furry friend, but for you and others in your…