Why Is My Puppy Always Hungry?

It’s easy to be blinded by love when you get a new puppy. All you see is a cute little bundle of energy and joy who’s ready to snuggle and play the day away.

However, you must not allow those large, precious eyes to trick you into giving him everything he wants.

While growing up, my dog always seemed to be starving, and I, a concerned parent, felt that I had to feed him whenever he batted his lashes in my direction.

That’s the absolute wrong move. Your puppy may seem hungry 24/7, but he’s likely just trying to con you into giving him a snack.

Though, how can you know for sure?

Why Your Puppy Seems So Hungry All the Time?

Puppies need training in every aspect of their life – including eating! When your pup was still with his mom, he got to eat whenever he wanted. That kind of schedule won’t fly in his new domesticated lifestyle.

You’re going to want to feed your puppy multiple times a day at set times. It will take him a while to adapt to your schedule, but be patient and stick to it!

Your Own Bad Habits

That’s right! You might be responsible for making your puppy appear so ravenous.

Similar to how you have to train your dog to eat on a schedule, you also need to ensure your dog is not learning how to beg for food. Therefore, you should never feed dogs table scraps, especially while they’re still young and impressionable.

Health issues aside, after your puppy gets his first taste of human food, he will keep coming back for more. This inevitably means you’ll continue feeling bad for him and feeding him more than he needs.

While most of their wild nature has been bred out over decades of domestication, your dog has some leftover instincts from his wolf relatives.

Since your puppy doesn’t yet know when his next meal is coming, he’s thrilled whenever you feed him. He will likely scarf it down in seconds flat because he wants to make sure his belly is full.

If your puppy is a bit older or came from the streets, this habit may be even more severe since he has lived experience dealing with food insecurity.

Though it is rare, your puppy may be suffering from a medical issue that’s influencing his appetite (such as worms, diabetes, malabsorption, etc.)

If it seems like his hunger doesn’t die down after a few months, you should contact your vet to discuss your concerns.

How to Deal with a Hungry Puppy?

As previously mentioned, you’ve got to make sure you’re maintaining a regular feeding schedule for your puppy.

When you’re first starting out, you should try feeding him several small meals a day. It’s recommended you give him 3-4 meals per day at the beginning of your training. Then, after a couple of months, you should be able to switch to 1-2 meals instead.

When it comes time for you to eat, put your puppy into a different room. This will not be easy, but you can 100% do it!

If your puppy is separated from you while you’re enjoying your meals, he won’t be able to learn how to beg for food, and you won’t be tempted to feed him.

In case you’re crate training your pup, you can always use this time to your advantage.

There are two recommended methods for slowing your puppy’s food consumption:

The first is to put a large obstacle, such as a ball or a cup, inside of his bowl, so he will have to work around the intrusion. That way, it will take him much longer to finish his food.

Specially made puzzle bowls also exist for this purpose!

The second option is to water down your dog’s kibble. I know it sounds pretty gross, but some puppies do better with slightly wet food. Since it gets a bit mushy and sticky, they’ll have to eat a bit slower than average.

How Do I Know If I’m Feeding My Puppy Enough?

Dogs, like humans, need to consume a certain amount of calories per day.

You could calculate an exact calorie count for your puppy, but let’s be real: if I’m not going to count my own calories, I don’t think I’m going to do that for my dog!

It’s going to be easiest to keep up with his weight and make sure it’s consistent with his breed’s typical growth patterns.

You can also check the information on the back of his puppy food bag. Most bags will overestimate how much your dog will need, but it’s mostly accurate.

It’s probably self-explanatory, but you can simply look at your puppy and tell whether he’s healthy.

When you touch your dog, you should be able to feel his ribs under the surface of his skin. However, you should never be able to see any of his bones. He should also have a visible waistline.

How to Tell if You’re Overfeeding Your Puppy?

If your puppy is overfed, trust me, he will let you know. The best clue lies within his digestive behavior.

For example, if he’s vomiting or experiencing excessive diarrhea, you may be overfeeding him. Since his little belly can’t handle the food, he will try to expel it as quickly as possible in order to relieve his distended stomach.

Your puppy will need a lot more food while he’s young, but you should be able to see a physical difference when he has been overfed. When your dog has gained too much weight, you won’t longer be able to feel his ribs or see his waistline.

He may also start to appear like he’s in pain. This could be caused by fast body growth putting too much stress on his skeleton.

Feeding your puppy can be a tricky task. There’s a fine line between feeding too much and feeding too little. The best advice I can give? Trust your gut.

Your puppy will tell you when he’s hungry or not feeling well, and you’ll be able to see a difference in his body and his behavior.

If you’re ever unsure, do not hesitate to reach out to your veterinarian. Your vet will undoubtedly become your best friend during these next few months! 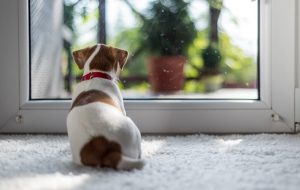 Leaving a puppy alone at home, especially for the first time, can be a stressful experience. But as much as… 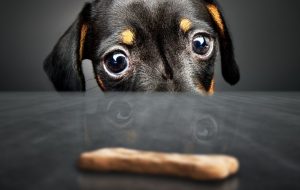 Having existed on our shelves since 1908, Milk-Bones continue to steal the hearts of dogs across the nation. I mean,… 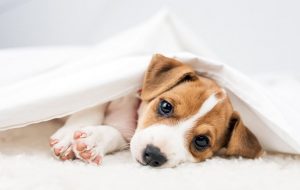 Bringing home a new puppy is definitely a big commitment. At the same time. it’s also full of excitement, and…

Is your puppy super aggressive to cars, cats, other dogs, or even to you? Mostly, when you see an aggressive…

Puppies
PuppyTip is a participant in the Amazon Services LLC Associates Program, an affiliate advertising program designed to provide a means for sites to earn advertising fees by advertising and linking to Amazon. As Amazon Associates, we earn from qualifying purchases. We also participate in other affiliate programs, such as Chewy, Walmart, and others, which help to support our work.